Previous postDo you need $$$ for your great idea?
The I E Jazz Festival has changed it's nameNext post 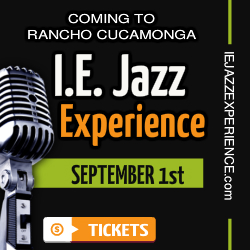 “We are offering a unique opportunity to experience top jazz entertainment in a relaxing setting,” notes Brian Cochran, event producer and organizer. “Attendees will also be able to learn more about wine and music and get the best of both,” he adds.

Born in Pasadena, California, Michael Haggins grew up with music. His uncle Al Duncan was a session drummer for Chess Records in the ’50s and ’60s  where he recorded with legends Muddy Waters, Buddy Guy, Etta James and  Sonny Boy Williamson.  Haggins studied communications at California State University, Long Beach and at one time worked editing shows like The Cosby Show and Dr. Phil. In the early 2000s, the bassist started his own band and ramped up his music career. Haggins’ most recognized songs, “Daybreak” and “Be Thankful,” have been featured in the television series, Community.  His works have also been featured in the television series Raising Hope and Wake Up With Al and also a part of the soundtrack of the motion picture, Hall Pass.

Jason Weber has been playing the saxophone for over 30 years. A veteran of the Southern California’s music scene, Jason has 8 CDs under his belt as well as numerous guest appearances on other artists’ recordings. He has performed with jazz icons Gerald Albright, Everette Harp and Brian Auger to name a few. With an average of 300 shows per year, he is in great demand for recording sessions and for performing with other artists.

The Experience includes workshops highlighting information on wine pairing, wine making and a history of Rancho Cucamonga wines that will be hosted by Mountain Vista Winery. Additionally, Rancho Cucamonga’s Guitar Center showcases an introductory class in Jazz Music 101.  “What an inventive way to learn about music, says Tony Hayes, Guitar Center manager.” It is a perfect setting to inspire, learn and enjoy,” he adds.

Cochran, also sees the event as a new step in the way concerts and festivals are presented. “We want our audience to do more than just enjoy the music.  We want them to participate and leave with memories.”

Biz Help 101 and Phat X. Inc are leaders in business development. With over 20 years in event planning and branding, they lead the area in marketing and event management. Tickets are on sale and are limited. For more information or to purchase tickets, visit www.iejazzfestival.com.